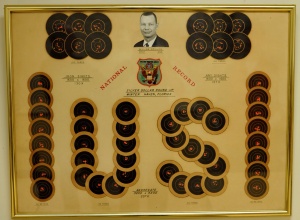 This is one of two remembrances I am posting today.
Neale M. Shank and William E. Krilling.

See also the post about my first coach, Alfred Perrott-White.

Memorial Day often includes family picnics, parades, and other celebrations of life. These celebrations, and indeed this life we enjoy, exist because of the sacrifices of our military. And it is our fallen military people for whom Memorial Day was created. They gave the ultimate sacrifice for us. As we celebrate, it is important that we celebrate their lives and remember their sacrifice. How many of us today would do the same? How many would not? Yet, we all enjoy the result of their sacrifice.

In generations past, it was customary to regularly visit cemeteries and remember loved ones. I remember for years my grandmother had a granite bench on the family plot where she would sit as she visited. Whole families would visit and have a picnic on their family plots. It was a wonderful custom and kept alive the memories and stories of loved ones who had gone from this earth. Sadly, people today often think that a morbid practice.

And now, a remembrance of a veteran, fine gentleman, and a truly great man.

William E. Krilling was a great shooter, a remarkable coach, and quite the character – in a good way! In some ways, he reminded me of my first coach (about whom I must blog some day): tough as nails and yet a very gentle spirit.

Though he did not give his life for his country, he would have and almost did in Korea. (More on that in a moment.) So, in theory, we should remember him on Veterans Day instead of Memorial Day. He just recently died, so I decided to write about him today instead of waiting until November. I could not come to his memorial because I was running a state qualifier match that day. I like to think he would have wanted it that way. Bob Aylward said Bill would know I was there in spirit.

We knew him as “Bill” and my time with him was far too short. At the time I first met Bill, he was retired from the Army and as a civilian employee was the coach of the International Rifle section of the US Army Marksmanship Unit (USAMU). He was a great a shooter, coach, and was an official at numerous Olympic Games.

Even though I was nobody, he saw my desire and my hard work and always encouraged me. Even though I was just a club level smallbore prone shooter, he worked with me a couple times when we could match our schedules. I saw him frequently at the 1996 Atlanta Olympic Shooting Complex and at his home ranges at Fort Benning. (I was on the volunteer staff helping run the Olympic facility, working for Gary Anderson, managing all the electronic target scoring operations, and officiating many competitions. I did the same at Fort Benning from time to time.) He and Gary helped me learn my way around a range as an official.

One day, in the fall of 1997 I believe, I showed up in his office and told him that I had received my ISSF Judge License. He congratulated me and said “You know what you are doing and will make a great official.” This boosted my confidence, coming from a multi-time Olympic judge. (I had only started coaching in 1995 and really gotten involved in international style shooting earlier that year.)

Later that day, Dr. Dan Durben (my primary coaching mentor) told me that he needed a jury and only had two members. Would I be the third? I agreed, of course. An incident had taken place as part of a final round during a USA Shooting selection match that was taking place then, and a protest had been filed. It turned out that the other two members of the jury were Frank Briggs and Bill! The three of us and Dan spoke and, because both of them were affiliated with the USAMU, and because the athlete filing the protest also was with the unit, I was elected chair of the jury. It sounds like a TV show setup: “There I was on my first jury and as a rookie I was the chair with the other members being big time old hands.” We went into Bill’s office and with no fanfare or comment he motioned to me that, as jury chair, I should take his seat behind the desk and he and Frank would sit in the guest chairs on the other side of the desk. I had assumed that, being his office, he would sit in his own chair and that as junior man I would be the last one to sit there for that meeting. Bill always understood the details.

We saw each other numerous times through the years before his retirement and a few times afterward. We served together on the jury for the state high school championship for many years. His granddaughter Laura competed in that event at least one year that I recall.

On March 2, 2001, a retirement dinner and celebration was held in Bill’s honor. I was lucky enough to be invited. When I was led to my assigned seat I was surprised that it wasn’t in some back corner! The room was full of military leaders and international shooters, including possibly one of the largest collections of Olympic shooting medalists ever in one room. As if that weren’t enough, the gentleman seated next to me on my left was in perfect uniform, with one added unusual item. Tight ribbon around his neck, light blue, thirteen white stars, and a medal. Yup. It was then Major (now Colonel retired) Gordon R. Roberts who at the time was the youngest and only currently active duty recipient of the Congressional Medal of Honor.

The room was full of dignitaries, and a few surprises including the retired chief of staff of the South Korean Army. The link below to the retirement dinner article lists numerous other distinguished guests. But the biggest surprise was Bill’s old company commander, Captain Odderstol, who had recommended Bill for the CMH, ultimately resulting in his Distinguished Service Cross (DSC) award. There wasn’t a dry eye in the house when those two were reunited for the first time since 1953.

After dinner there were a number of distinguished speakers with a lot of laughs and memories. Even Lones Wigger laughed with delight when his coaching “skills” and Bill’s were compared! (Though not noted for his coaching skills, Lones is a great shooter!) Finally, Colonel Arnold, Commander USAMU, was at the podium. He asked us to stand and then he read the citation for Bill’s DSC. The award, though given to Bill in 1953, had never been officially presented in a ceremony. You could have heard a pin drop. When Colonel Arnold finished reading, the room erupted. Even the solid old Iron Works building complex shook and the roar was deafening.

Afterward there was much socializing among the crowd. It was a fun evening honoring a great person. I have a photograph with Bill from that night which I treasure along with memories of him. He was a treasure.

Bill was also an incredible competitor in his own right. Remember Roger Bannister who broke the “so-called” mythical 4 minute mile “barrier” in 1954? Bill is our sport’s Roger Bannister in a  way. He was the first ever to fire a perfect 3200 in NRA conventional prone smallbore rifle competition. He earned numerous other awards in his career and then became a coach and his athletes won even more. The photograph above, taken earlier this year, is of a framed set of targets that Bill fired, scoring 3200-257x. I believe these are the targets from that first 3200, though I welcome details on this set.

Last year, while attending a sniper school graduation (where one of my students distinguished himself), we took a detour afterward and my student took a picture of me next to the sign for the WIlliam E. Krilling Range on Fort Benning. It has now become another memory of a great man.

Learn many more interesting facts about Bill at these links:

Also, search the web for William E. Krilling for other articles and photographs.

Your comments and responses are always welcome.

To be notified of new posts, go to the “Home” page and select the small blue “Follow…” link on the right side of the page just above the search box. 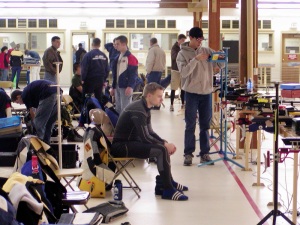 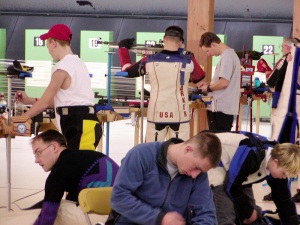 Often, an athlete will work at something and then, upon finally accomplishing the first successful attempt, say to themselves or others “I’ve got it!”

Have you ever struggled a bit and then started to get a string of good shots? When that happened, did you say to yourself “I’ve got it!” only to then lose it?

When our ego takes control, we lose control. When our ego tells us “I’ve got it!” then we subtly let up and lose that fine edge that was giving us the good shot process performance and then the good result. Any time you catch yourself saying “I’ve got it!” you need to immediately stop and regroup.

Every shot is new and the athlete must start over from scratch to achieve a great performance.

The very best athletes in the world do not believe “I’ve got it!” Instead, they have confidence in their training and routines, and believe they have trained themselves so well that they can perform consistently at a very high level, but only if they continue to put in hard work, both in training and in the competition – and on each individual shot process performance. You don’t believe that? Let’s take a look at a couple of photographs kindly given to me years ago by Dr. Dan Durben and find out why he took and shared those photographs.

Take a look at the first picture. What do you see? Who is the athlete and what is he doing? Matt Emmons is sitting quietly in the middle of the range. Notice that all the others are running around setting up or looking for their equipment. Matt is sitting quietly and preparing himself.

Take a look at the second picture. What do you see? Who is the athlete and what is he doing?  Jason Parker is starting to set up his position, balance, natural point of aim, and is settling in with holding and dry firing… before the preparation period has even begun. All the others are still getting their gear organized. After all “Prep hasn’t started yet.”

Are all those other athletes so much better that they can just jump right in? If Matt and Jason are so good, why are they working harder than anyone else and acting like they don’t have it all figured out? After all, aren’t they two of the best?

Let’s spin that around: Because these two athletes know that no athlete ever has it all figured out, and because they know that each shot is all new from the beginning, they work harder and longer than most others. That includes more and proper preparation.

Is it any coincidence that just 4 months earlier, out of all the athletes striving to fill the spots, Matt and Jason were the two members of the US Olympic Team for the men’s air rifle event? Probably not.